29 Jan Sierra Leone: Major Changes in How They Operate 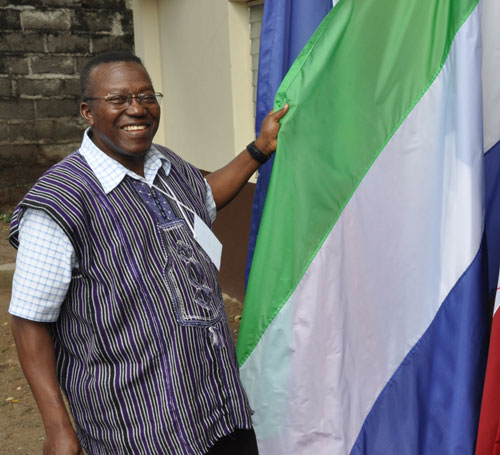 Billy Simbo, Bishop of Sierra Leone Conference, gave his report to the General Conference delegates on Tuesday, January 12. He returned to Sierra Leone two-and-a-half years ago to lead the conference in a transition to stability and renewal.

“As you know,” he told the delegates, “Sierra Leone went through 11 years of Civil War. It ended 9 years ago, but you can still see the affects in the country. I am happy to report that the Church of the United Brethren in Christ is alive and well in Sierra Leone.”

Sierra Leone Conference meets every two years. During their latest meeting, in December 2008, the 102 delegates made several big changes:

If a vacancy arises, all of the ordained ministers get together, and anyone among them interested in the job presents his resume and vision for the church. When they have whittled down the candidates, this Counsel of Ordained Elders presents the candidate at the next session of the conference, which can then ratify the selection.

“Because there were more lay delegates in the conference, it used to be easy to influence them to vote for candidates,” says Bishop Simbo. “This took that problem away. And it has made a big difference in Sierra Leone.”

Billy Simbo became the first person ratified as bishop. He was officially installed on January 11, 2009, in a consecration service which included the leaders of other churches in Sierra Leone, including the country’s Archbishop of the Roman Catholic Church.

“The problem with that,” said Bishop Simbo, “is that people didn’t want to go to some districts. So when it came time to elect a district superintendent, you were stuck with those already there or somebody willing to go to a district.” Plus, the most qualified person wasn’t necessarily elected.

Now, the bishop appoints superintendents by function, rather than by geographic location–superintendents of Finance, Pastoral Development, and other areas. The conference then ratifies or turns down the appointments. These superintendents, along with several other persons, comprise a Bishop’s Cabinet.

These are major changes in how Sierra Leone Conference operates, but Bishop Simbo says people have accepted them well.