16 Jan Back to Our German Roots, Via Africa 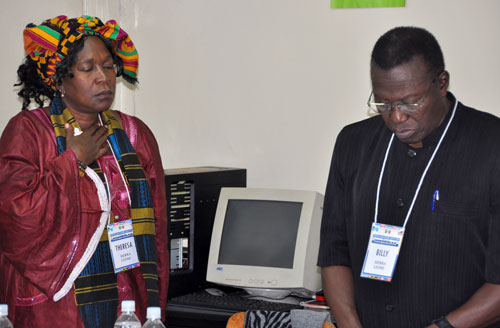 Theresa Musa and Billy Simbo, the two delegates from Sierra Leone, during the January 13 prayer time for Haiti.

William Otterbein, one of the United Brethren founding bishops, originally came to America in the 1700s as a missionary from Germany. Is God up to something in Germany, UB-wise? It’s looking mighty suspicious. 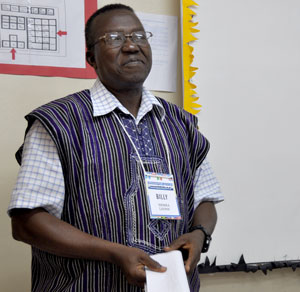 “In 1997, one of our ordained ministers took refuge in Berlin. Being a well-trained United Brethren pastor, he didn’t sit idle, but started a church in Berlin.

“In 2007, I was privileged to visit Berlin to celebrate their tenth anniversary. They invited me to preach at the final service. About 400 people attended. Most were German citizens, but many other African nations were represented.

“My challenge to them was that when we get together to celebrate their 20th anniversary, they should come to General Conference asking to become a national conference of the United Brethren church.

“We have reaped a lot of benefit from this church. Before medical teams from the United States came to Mattru Hospital, the church in Berlin was sending us equipment for the hospital.

“The minister who started the church in Berlin moved on to the United Kingdom in 2008, and another pastor took his place. He’s pastoring a Methodist church, but has asked permission to start a United Brethren church in England. So I said yes. We’re excited about that.

“There is great potential in Germany and all of those European countries, because everywhere you go, there are lots of African immigrants. We can start churches everywhere with them.”

Jeff Bleijerveld, director of Global Ministries, explained that the United Brethren name is registered with the German government, which is a difficult process. Now, if we want to open other churches in Germany, we have representation before the government.