14 Jan The Dwindling Fellowship of the Meeting 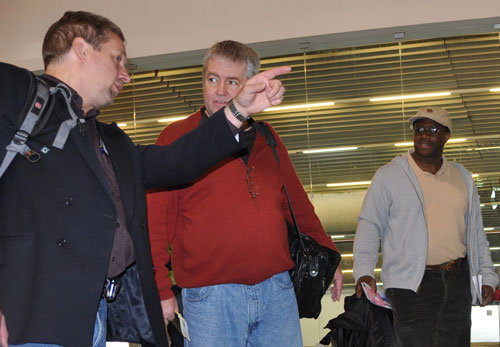 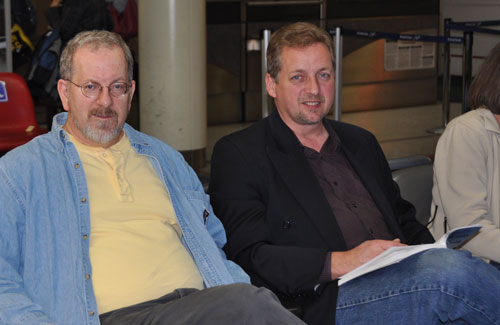 Steve Dennie (left) and Jeff Bleijerveld waiting for the flight to Fort Wayne...home,

A tired group of General Conference delegates left the Gran Paris Hotel in La Ceiba, Honduras, at 4:15 a.m. The conference bus (“Followers of the Lord” in bit white letters across the windshield, but in Spanish) came to pick us up. David Raudales, director of the Bethel Band and son of Francisco and Maira Raudales, tagged along with the bus driver to see us off.

The two Guatamalans, Francisco Najera and Rolando Valenzuela, deboarded at the bus station on the outskirts of town. The rest of us continued on to San Pedro Sula.

In San Pedro, the Americans, Jamaicans, and Sierra Leoneans boarded a flight for Miami about 9:30. they left four persons behind. Carlos Quesada, a workshop leader, would be catching a flight to Brazil to continue his presentations on behalf of Operation Mobilization. Jeff Dice waited for a flight to Costa Rica. And the two Canadians, Brian Magnus and Paul Plato, also had a later flight back to Canada.

In Miami, we lost Winston Smith and Isaac Nugent, who continued on to Jamaica. That left five Americans and three Sierra Leoneans.

On to Chicago. There, the Sierra Leoneans and Americans parted company. Billy and Alan Simbo were heading to Philadelphia, while Theresa Musa caught a flight for Baltimore. 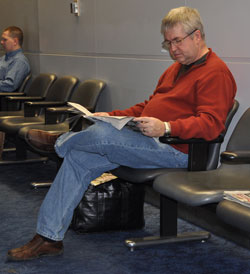 Phil Whipple waiting for the flight to Fort Wayne.

Meanwhile, back in Honduras….

And that’s it. The end of a great meeting.