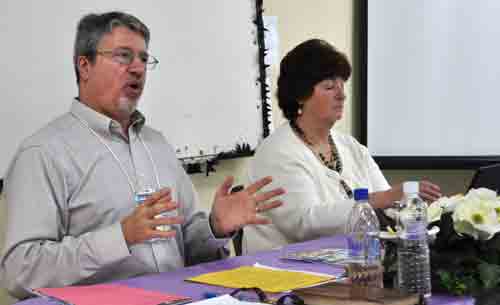 Brian Magnus, chairman of the General Conference, opens the meeting with Donna Hollopeter, serving as secretary, beside him. 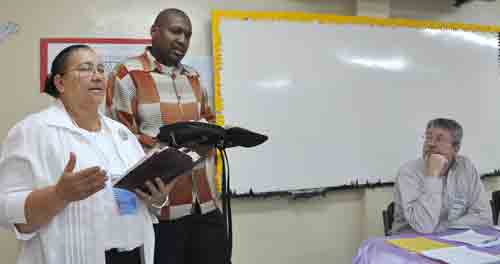 Juanita Chavez (left), superintendent of Honduras Conference, giving the morning devotional. The translator is a teacher at the Bethel Institute. 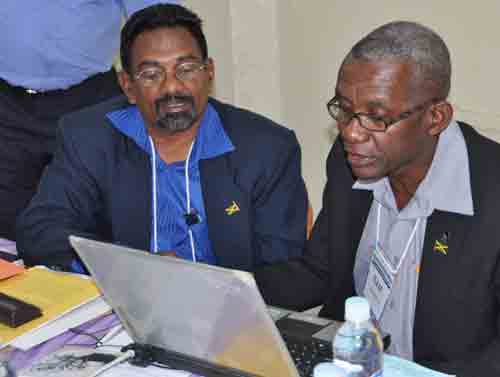 Winston Smith (left) and Isaac Nugent do some last-minute touch-up on their presentation right after lunch. 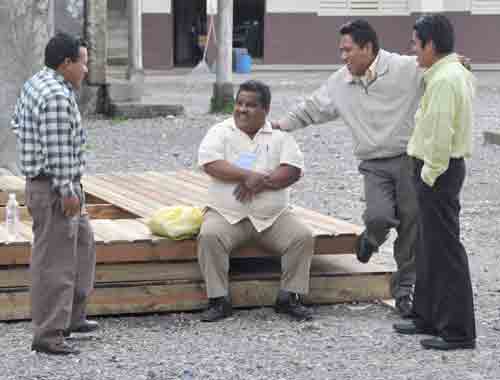 Juan Pavon Pavon, superintendent of Nicaragua Conference (seated) joking with some other Central American delegates during an afternoon break time. 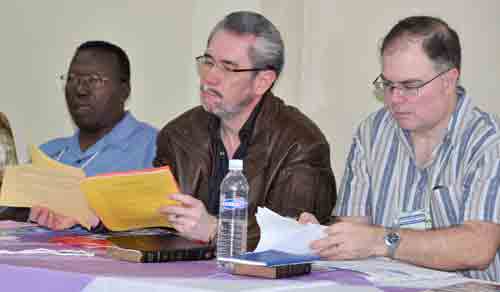 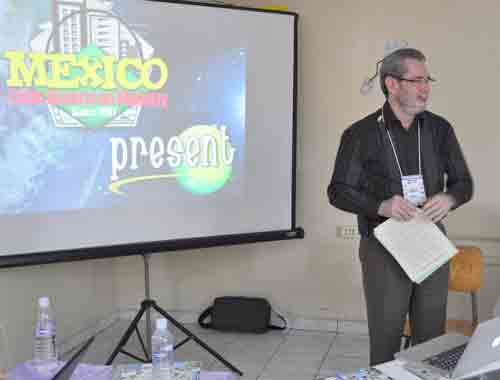 Bishop Denis Casco of Mexico Conference gave the last report of the day.

The General Conference delegates left their hotel at 7:45 abd were bussed to the Bethel Institute, the Honduras Conference-operated school, where a breakfast awwaited them. Then, at 9:00, they moved to a classroom set up with tables in a U-shape.

Juanita Chavez, superintendent of Honduras Conference since January 2009, opened with a devotional from Ephesians 4. Then the delegates launched into the first actual business meeting of the conference.

Brian Magnus, bishop of Canada, was elected chairman of the International Executive Committee in 2001 and has served in that position ever since. That role also makes him chairman of the General Conference.

He pointed out that the General Conference has very little actual business to take care. Instead, this meeting was primarily a time to share what is happening in our countries, encourage each other, pray for each other, and find ways to cooperate in advancing the Gospela.

He explained that the delegates would go around the table three times, country by country, each with a different purpose.

Donna Hollopeter served as secretary in place of Ajiax Wo of Hong Kong, who was still in New York City hoping to secure a visa from the Honduran consultate that morning (a meeting which proved successful, though he wouldn’t reach La Ceiba until Tuesday afternoon).

Donna called the roll. Each of the nine national conferences were entitled to two delegates. Three conferences didn’t meet that standard:

Karis Vong prayed in Cantonese for Ajiax, who at that moment was probably with the Honduran consulate. They they started around the room, in alphabetical order, reporting on the work in their individual countries. Which put Canada, and Chairman Magnus, on the spot.

The conference then adjourned for the day. They took an excursion to the Honduras Conference campground outside of La Ceiba. In the evening, they attended a church service at a local church, and Rev. Francisco Najera of Guatemala preached.