New Horizons UB paid off the mortgage on its new facility far ahead of schedule. Pastor Bob Loar reports that in the last five years, over $1.5 million passed through the building fund as they worked to relocate the ministry following the arson at the former building. 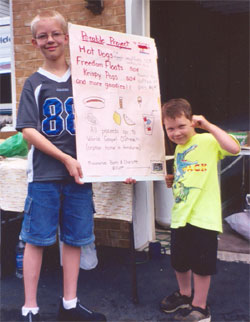 Michael Wentz, pastor of Living Hope UB, challenged his congregation to take $10 and multiply it for UB missions. J. P. and Matthew (the boys pictured above) decided to invest in a food and beverage stand at a neighborhood yard sale in order to multiply their “talent.” They multiplied it ten times! Their donation of $100 was added to Living Hope’s missions offering.

Our director in Macau sent this update on June 12.

14 Jun An “Inside Out” Mission Trip

The Blissfield church (Blissfield, Mich.)  is doing something very different–something they’re calling an “inside-out” mission trip. They are bringing people from our Jamaica Conference to the States July 7-14, so the Jamaicans can experience a cross-cultural ministry trip of their own. Michael Hewitt, the church’s youth pastor, writes:

“During this time, 15-20 Jamaicans are coming to Blissfield for a mission trip of their own. Seeds were planted two years ago when we took 33 participants to the Yorktown and Maypen churches in Jamaica. It’s taken two years of planning, acquiring visas, etc., but it looks like our hard work and prayers are paying off! Ministry opportunities for the Jamaican Team and the Blissfield church family include:

“We thank the Lord for this opportunity and pray for all the Jamaican participants that are preparing and training right now!” Next January 5-9, a team of UB youth pastors will travel to Jamaica to provide student ministry training in such areas as:

The Wust family is now in the States for their annual Stateside visit. Their time will be spent visiting with family, doing their annual supply shopping, speaking in churches, meeting with individual supporters, attending board meetings and getting their oldest son, Andrew, ready for college life at Huntington College.

Dan will also be doing some studying in preparation for teaching at the new pastor training facility that is soon to open. The Arise & Shine pastor training center, a dream of Dan’s for several years, will target uneducated and poor leaders serving the Lord in the rural churches of Honduras. Dan writes, “We have been striving now for two years to get to this place, and praise God that we are now here.”

India’s recent elections saw the Hindu Fundamentalist party (BJP) lose power to the more moderate Congress party, which is headed by Sonia Gandhi, wife of former Prime Minister Rajiv Gandhi, who was assassinated in 1991. Sonia, despite controversy over the fact that she was born in Italy, was eligible to become Prime Minister. However, she didn’t want the job, and instead proposed Dr. Manmohan Singh for the job. He was sworn in on May 22.

Our couple in India are encouraged by the change in government. They write, “Dr. Manmohan Singh is nationally and internationally known as an outstanding economist. He has a clean image, a simple lifestyle, and a good name among all parties. He says he will focus on the poor and give secular and stable government. Under his leadership, Muslims, Sikhs, and Christians feel secure. We need to wait and see.

“Amidst the political turmoil in this month, we could sense God’s guiding hand. In Tamil Nadu State, after the Anti-Conversion Bill was passed three years ago, Christian evangelists, workers, and organizations were harassed and their bank accounts were frozen. Those who became Christians had to stand in front of a judge and give reasons why one wants to become a Christian. With the defeat of the Hindu Fundamentalist party, the Tamil Nadu State government removed this act and there is absolute freedom for Christians. The unexpected defeat of BJP shocked all Hindu fundamentalists. They really did not know what hit them. We see God’s hand keeping the doors open to proclaim the Gospel in India.”

Luanne Brooks, a UB missionary working with OMS International in Haiti, sent this update on May 28.

“I haven’t written in a while, because, my life has been pretty boring lately. I work during the day, check my e-mails, go to prayer meetings and church, and read. But I do have a couple of stories to share from the clinic.

“First of all, the government inspected the clinic this week and rated us a 9.5 out of a possible 10. We have also been approved to start a feeding program for the malnourished. Malnourishment is a huge problem in Haiti right now. Food is very expensive and money is scarce.

“On Monday, I saw a young woman who was very ill. The lymph glands on the side of her neck were huge. She had her newborn baby with her that was born last week. I suspected HIV, and after testing her, I found that I was correct. This was one of the many times here that I was hoping I was wrong. It was up to me to tell her.

“She took the news very stoically. I don’t think she was totally surprised with the news, but she was very quiet and when she did speak her voice cracked. I asked her if she had Jesus in her heart, and she said no. I asked her if she would like to, and she said yes. I praise the Lord, that there are many perons like her who are so open to asking Him in. We just need to ask. She has been referred to a church near her. We gave her a new testament in Kreyol and I pray for her daily.

“She is the second young woman I have led to the Lord in the past two weeks. The other was a young woman, Angelina, who has had three children, and all have died. Her husband now has rejected her and is being very cruel to her. I talked to her about her relationship with the Lord and she accepted Him. She came back this week and visited with me. She said her husband is still very mean, but she now has a joy in her heart that he cannot take away.

“On a funny note: Monday a young man came in and complained that when he drank a lot of wine, he vomited. I laughed and told him not to drink the wine.

“I have been consulting all my patients without a translator. I have them talk slowly, and I am able to understand most of what they say. I repeat what I understand their problem to be, and they tell me if I got it right. They are all so patient and sweet. Most of them enjoy helping me understand. My biggest fear was that they would not want to see someone who didn’t understand them completely, but it doesn’t seem to be a problem.”

Two newly endorsed missionaries are currently raising support to get to their respective fields. If you would like to partner with them, they would appreciate the support.

With Jana redirecting her focus to other areas, Jennifer Blandin will serve as team leader in 2004 with Gary Dilley assisting as “remote director” from the US.