30 Oct 18 from Anchor at Willow Creek

On October 13, the UB Executive Leadership Team and the conference superintendents held a special meeting in Huntington, Ind., to consider options for the future of the United Brethren church. A special study committee, having studied several options, recommended that we pursue joining with the Missionary Church, an evangelical denomination based in Fort Wayne, Ind. After meeting with the superintendents on October 13, the ELT voted unanimously to pursue joining with the Missionary Church.

“Kids arrive at their small group, made up of other kids in the same grade, to participate in a fun game or activity together. Their small group leader has a chance to ‘catch up’ on how their week went here. After a short time of activity, all small groups gather for worship and a biblically based lesson, presented creatively, in the large group. Small groups are then dismissed to go to their designated spaces to talk about implementing the learning, to pray, and care for one another. These small groups can gather outside of the church setting so kids can build relationships with one another. They can also serve in kid-sized ministry or peer evangelism opportunities!”

On October 12, Sunfield UB will dedicate a new 82-by-60 foot building addition, which will provide a fellowship area and more Sunday school classrooms. The building was begun a year ago. Former pastors and members will take part in the service. Mark Ralph is the current pastor.

“Angela Oesterle returned at the end of June from working as a volunteer in the library of Jamaica Bible College. She helped catalog hundreds of books to be shelved in their new building. She also taught as a substitute in the college and worked with Jamaicans in Bible studies and Sunday school. She was stretched physically and spiritually from the challenge of working in a different culture. She had previously gone twice with a group from Eden Church for two-week missions trip, and she knew the Lord wanted her to give more time to Jamaica. Angela plans to return to Jamaica when several details are worked out, such as further education and finances.

“In August, we held VBS with the theme “Crown Him King.” This was for the whole family. Margaret Maybee, our music director, and her husband, Milan, one of our former pastors, organized the program. Wanting someone to minister to parents who is still raising children, they brought in Valerie Reynolds, the associate pastor at Mt. Hope UB church in Carson City, Mich. She talked about why God sends tests into our lives and how to handle them.

“While Valerie talked to the adults with young children, the older adults conducted the class time for the children. A staff person from the Lansing Campus Life chapter talked to the teens about learning to be like Christ in four specific areas.

“The missions project was to raise money to buy shelves for the Jamaica Bible College library. Over $800 was raised in five nights for this project. On the last night, 3-4 tornadoes touched down near the church, causing some unexpected excitement! The Lord protected Eden; no one was hurt and no property was damaged, although there was a lot of damage near the church.

“Phase 2 of a three-part building project has begun. Phase 1 was the completion of a new parking lot, because a Family Life Center is being built where the old parking lot was, behind the church. The Family Life Center, which will cover almost 22,000 square feet and cost $2.2 million (including the new parking lot), was begun by a ground-breaking ceremony on September 7. In this ceremony, six men who are church leaders, including the three pastors, turned over a shovelful of dirt. Then they each handed their shovel to a child, who then turned the next shovelful. This was a symbolic means of showing that Eden belongs to the present and to the future.

“The Family Life Center will include a gymnasium that can be used for many things besides sports events, such as receptions, concerts, and eventually, worship services. It will be open to the community as much as possible as a means of establishing relationships and reaching people for Christ. The building will also have classroom space for the Sunday school.” 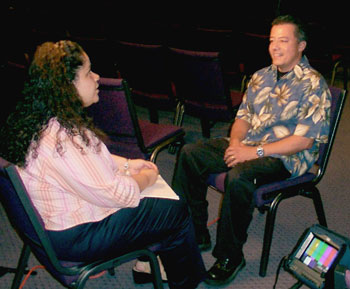 Ron Gonzales, pastor of Open Bible Fellowship, being interested by the ABC crew. 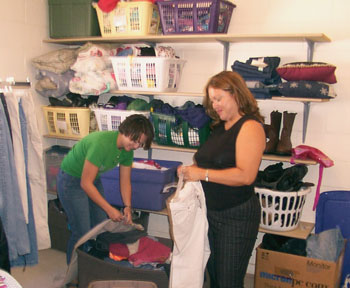 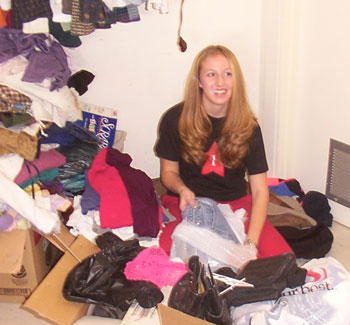 One of the Johnston daughters at work in Angels Closet.

On September 29, a family from Open Bible Fellowship (Safford, Ariz.) was featured on ABC’s Good Morning America. Bill and Ruth Johnston started a clothing ministry when the local clothing bank closed. They feared that needy family would go unhelped, and their daughters would come home from school reporting about classmates who needed clothes. So they decided to do something about it.

The result was Angels Closet. They began by storing donated clothes in their garage, giving them out to individual families. They soon expanded into a 10-by-10 foot room behind the church, and then it took over two rooms in the church educational building.

Now, Angels Closet regularly serves hundreds of families a month. They come from four counties and American Indian reservations. All five of the Johnston daughters, ranging in age from 10 to 23, are heavily. Bill says, “You know it’s not something they have to do. They’re doing it because they want to do it. And it makes me feel very proud.”

Two grandchildren are also helping out. Says Trystin, age 5, “I give out toys. I let them take them with them. They don’t need to take them back.”

Bobbie Thompson, the church secretary, reports, “Since the show, we have had several calls and emails regarding the work here. NBC is now wanting to do a special on this family and our clothing bank, and has even spoken of flying them to New York to be on a talk show. Several donations have been called in, and several cash donations have been made.”

An article about the Johnston family can be found on ABC’s website. Angels Closet also has its own website.

Bobbie Thompson also wrote about other recent goings on at Open Bible Fellowship.

“Over 150 kids attended each day of our summer Vacation Bible School. There were 33 decisions for Christ and several rededications.

“A team from the church goes into Mexico every other month to distribute food and clothing, and to preach the gospel. Last count, souls saved to date was over 900.

“Sunday school is going strong, and our worship ministry just added three new members to their team, which now gives us a total of 10 members. Things are going great. With the new facilities we have had plenty of room for everyone.

“Right now, we are getting ready for our Family Fun Night, an alternative to Halloween. Last year, over 1200 people come through our doors. There will be several games with prizes, a concession stand, and a concert held outside during the evening.

“We are excited about what God is doing here in Safford. We are experiencing new growth within the body, and are continuing to look for more.”

The Woodbury UB church (Woodbury, Mich.) voted to close, as of October 31.