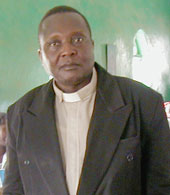 Albert Beckley (right) was elected as the new General Superintendent of Sierra Leone National Conference. He replaces Rev. Joe Bob Amara, who served in that position through much of the 1990s. Rev. Beckley has been serving as Administrative Assistant for many years. He was elected during the national conference meeting in February. Six North Americans attended the February conference: Gary and Rhonda Dilley, Jason and Donna Hollopeter, and former Sierra Leone missionaries June Brown and Ruth Benner.