First Church of The United Brethren in Christ Bronx, Inc. is located in the northern section of The Bronx, New York. Formed with the initial intent of providing a place of worship for the growing number of United Brethren members from Jamaica who were living in the Tri-state area, the church has grown to become a melting pot of Caribbean, Nigerian, Ghanaian, and American Christians. We are seeking a senior pastor who will work faithfully with our congregation to evangelize the surrounding community and help our current congregation grow spiritually. We are a small church with the potential to grow both numerically and financially with the right leadership. We desire our lead pastor to guide our experienced team of volunteers in stepping into the next season of growth we believe God has in store for First UB.

We are seeking a pastor who has the ability to operate in a diverse multicultural urban inner-city community. He or she should be willing to take on the task of working alongside our team of dedicated ministers, evangelists, and deacons to help build The First Church of the United Brethren in Christ. Our next senior pastor must be a skilled communicator with a shepherd’s heart, a passion for outreach, vision-driven, and future focused. A servant leader that is skilled in conflict resolution and who operates with a solution-oriented mindset based on biblical teachings and also possesses the traits of resilience and faithfulness to the ministry that God has called him/her to. He/she should be able to undertake difficult situations with a positive outlook. The ability to encourage others to assume and carry out leadership and be an effective conflict manager are essential.

We need a leader who has a heart for young people and will work with our youth leaders to build our youth ministry. First Church of The United Brethren in Christ, Bronx, needs a leader that is a visionary and will be able to put in place programs that will help demonstrate God’s love through preaching and social outreach. It is also expected that this individual will maintain professional ministerial credentials with the Church of the United Brethren in Christ, USA.

If this sounds like something for which God has been preparing you, please send a copy of your resume and a cover letter to Bishop Todd Fetters at bishop@ub.org.

College Park UB church (Huntington, Ind.) is accepting resumes for an opening in our pastoral staff as Pastor of Youth/Emerging Adults. Email resumes to office@cpubchurch.com.

Below is a summary of the position.

About College Park
College Park is affiliated with the United Brethren in Christ denomination. The church is in a small, Midwestern town in Indiana and is located next to Huntington University. Church attendance is around 400, and the youth group has about 25 youth. About 4-7 adult volunteers work regularly with the youth ministry.

Purpose
The Youth/Emerging Adults Pastor is responsible for giving primary leadership of the ministry strategy to students in grades 6-12 and their parents/guardians. He or she will be responsible for designing, coordinating, and overseeing a dynamic youth ministry focused on building devoted followers of Christ.

The pastor will also give leadership to the Emerging Adults ministry. Leadership includes creating a strategy that will provide community, discipleship, and care for emerging adults through a team of people willing to engage those in the church who are early in their careers and attending college. Mark grew up in Van Wert, Ohio, and graduated from Huntington College and later St. Francis College in Fort Wayne, Ind., where he earned his Master’s degree. He is survived by his wife, Kathleen, and their two sons. He and Kathleen were married October 19, 1963.

Mark worked in public education for many years–as a high school guidance counselor, principal, and superintendent. He also held various pastoral positions at United Brethren churches, going back to 1962: the Willshire and Zion churches in Willshire, Ohio; Otterbein (now New Horizons) in Rockford, Ohio; and Mt. Victory in Decatur, Ind. His most recent UB position was associate pastor of Praise Point church in Willshire. He was most recently pastor of Rockford Belle Community Church in Rockford.

Memorials may be directed to The Rockford Belle Community Church. You can view his online obituary here.

Tomorrow, November 21, is Day of Giving for Huntington University. The goal is to raise $100,000 on this one day. The Forester Fund supports 93% of students with scholarship assistance.

Keep these matching gift challenges in mind when you make your gift to Huntington University.

Dollar for Dollar: The first $5,000 in total gifts will unlock a matching gift of equal amount. Double your gift by giving early in the day!

Foresters Across the Country: Turn your part of the United States green by being the first from your state to make a gift. Every time five states turn green, we’ll unlock $1,500 in matching gifts.

Brand New: New to the Forester Fund? This is the challenge for you! The first 20 first-time gifts on Day of Giving will unlock a $5,000 matching gift.

Set the Pace: Lead the way by making a gift of $1,000 or more. Your gift will set the pace for Day of Giving and grant you membership to the Pacesetter Society, complete with special perks throughout the year. Even better, the first 10 Pacesetter-level gifts will unlock a $10,000 matching gift.

Tomorrow, November 21, a giving form will be available on this page. 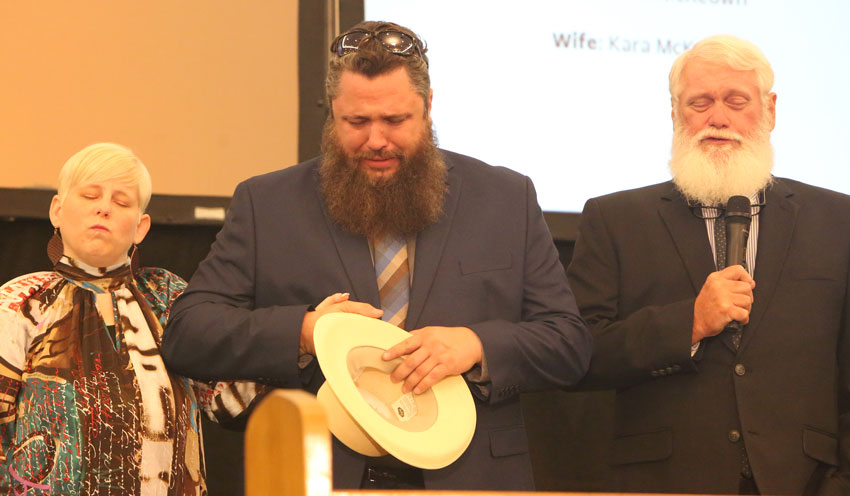 Rev. Chuck McKeown (right) praying for the persons being ordained during the 2019 US National Conference, including (on the left) his son Josh and his wife, Julie.

Josh was diagnosed with a rare form of leukemia in 2010, and went through an experimental clinical trial at the M. D. Anderson cancer center in Houston. For the past nine years, he has been taking the same chemo drug, and the cancer has been held in remission. But in August, their insurance company said they would no longer cover the cost of that particular drug, and required that he switch to a cheaper alternative chemotherapy. The result, his wife Julie explains, is that he began experiencing certain symptoms and tests show that the number of cancer cells in his body increased for the first time in nine years.

Julie wrote, “His symptoms are horrible, and his oncologist has never seen an increase of this amount while still taking chemo, which may indicate that his cancer has mutated and grown resistant to the chemotherapy.” He did lab work this week to determine if he developed this mutation, and hope to have the results in a week or so. “If Josh hasn’t developed the mutation, then they will try to get him back on his old chemo. But then we have to figure out a way to pay for it. His chemo is $12-14,000 a month depending on the dose.”

Julie continues, “I can’t event put into words how much pain Josh is in. It breaks my heart.”

Please keep Josh and Julie in your prayers. Josh was among the four men ordained in July 2019 at the US National Conference. He has been doing good work at Faith UB church since being stationed there in August 2017. 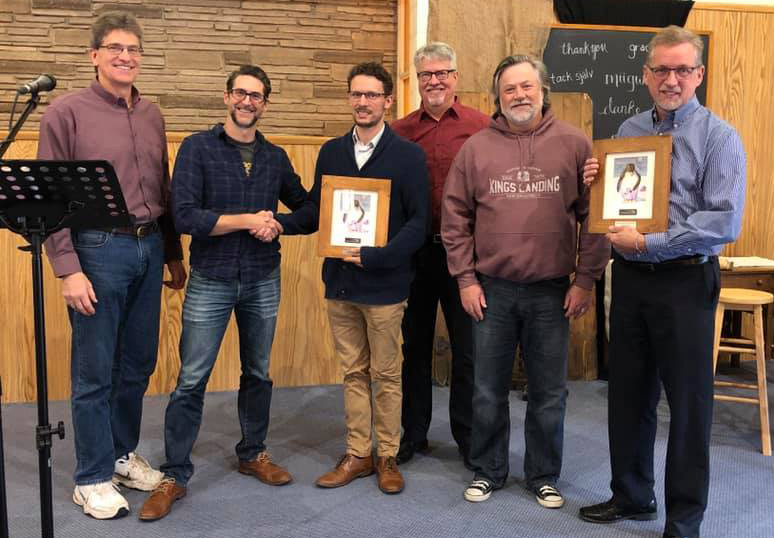 The US Thanksgiving is just around the corner. By now, all UB churches should have received bulletin inserts and any additional materials requested in advance of this year’s missions offering.

The focus this year is on raising funds to help our international partners join us for General Conference. The meeting will be held March 14-18, 2020, in Jamaica. Each country does all it can to raise as much, if not all, of what’s needed to pay their way. Your gifts will serve to supplement what may be lacking.

This conference becomes increasingly strategic as more of our fellow United Brethren engage in mission ministry beyond their borders and in some cases beyond their continent.

Use this link to download a short video that describes the project. It can be used in the weeks prior to and including Thanksgiving Sunday.