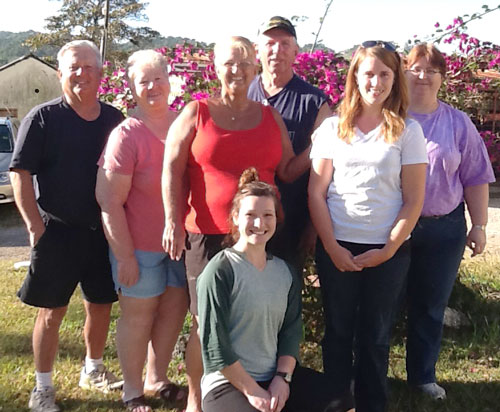 The team from Union Chapel and Hudson UB serving in Jamaica. In the middle are Dwight and Patti Kuntz, who will be serving on a more permanent basis in Jamaica as Global Ministries staff.

This team from Union Chapel (Fort Wayne, Ind.) is currently in Mandeville, Jamaica, working on the dining hall at Regent College of the Caribbean. Julie Schmidt, in the white blouse, is the only person not from Union Chapel; she attends Hudson UB church in Hudson, Ind. 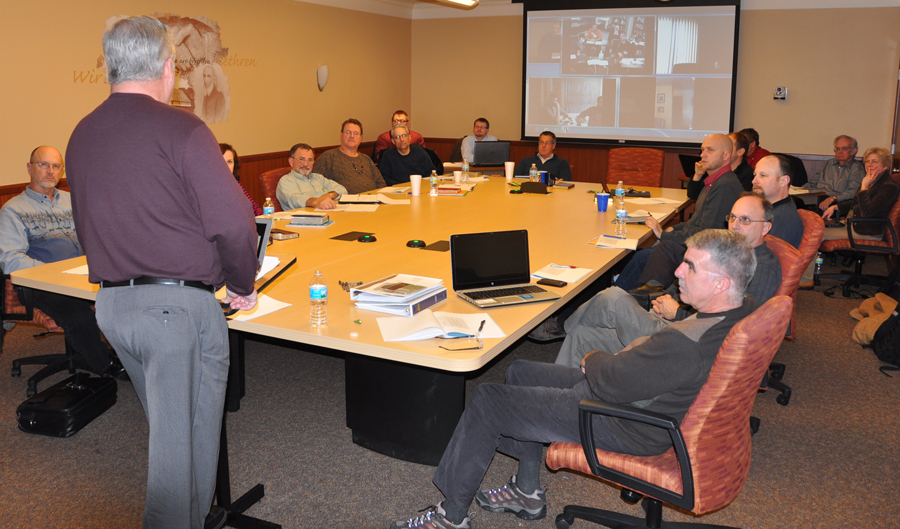 Bishop Phil Whipple teaching the “Leading a Governing Board” class. The screen in the back of the room shows persons attending remotely.

On January 15, 2013, 27 persons attended a glass on “Leading a Governing Board,” taught by Bishop Phil Whipple. The course was held at the Healthy Ministry Resources building in Huntington, Ind. Of the partipants, 17 attended in person and another 10 attended remotely, by video, from four different locations.

“Leading a Governing Board” is a requirement for ordination in the United Brethren church, though anyone is welcome to attend. 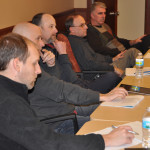 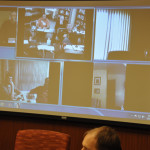 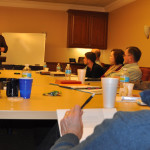 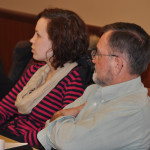 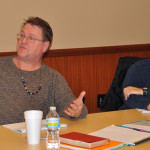 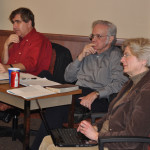 A team of 20-some persons from Mainstreet Church (Walbridge, Ohio) arrived in Jamaica on Saturday, January 12. They are working at the Malvern Camp under the leadership of Scott Hughes. A message on Facebook said:

“Work on several projects started Monday. We are providing maintenance around the camp as well as painting and laying floor tile in two dorm rooms. Teams also began grading and perpetration for pouring a cement floor for an expansion of the dining hall, as well as construction of storage cabinets for the school.

“Monday’s Bible School was a lot of fun for everyone. We will continue on all of these projects for the rest of the week, in addition to providing some health and medical education.”

Six persons arrived Sunday, January 13, in Sierra Leone. All are from Corunna UB church (Corunna, Ind.): Roger and Sharon McDonald, Ray and Sandy Proud, Michael Seigel (a young man studying for the ministry), and former pastor Jason Hollopeter. Only Roger McDonald and Michael Seigel hadn’t been to Sierra Leone before.

Today (Tuesday, January 15) they are in Freetown working at UB churches and (for Jason) conducting a couple of seminars.

This team will tackle a variety of projects through January 31, when they return to the States.

15 Jan Another Five Months in Qatar for Crystal Carpenter 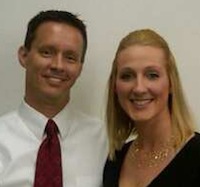 Randy Carpenter, pastor of Sunfield UB church (Sunfield, Mich.), attended the Cluster Leader Training in January 14, 2013. In June 2012, Randy’s wife, Crystal, was deployed to Qatar with the 323rd Military Police Company of the Army National Guard, of which she has been a member for about seven years. She is an administration sergeant in Spec Ops.

Randy says he is able to communicate with Crystal, either live or by email, nearly every day. She is helping to lead a worship team for military personnel, and plays volleyball and football when she gets the chance.

How’s he handling Crystal’s absence? “The first month it’s okay, but after that it nosedives. My kids are in college, except for the youngest, so it’s mostly just me rolling around the house.” But he’s managing. Crystal, he says, will “supposedly” return in May. 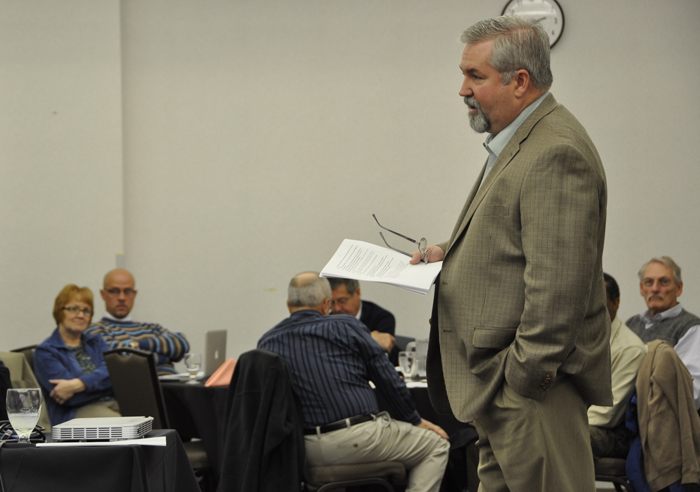 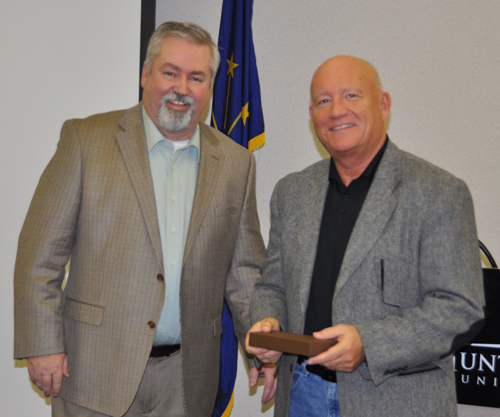 Bishop Phil Whipple (left) presenting a gift to Dennis Miller for his leadership of the clusters since 2009. 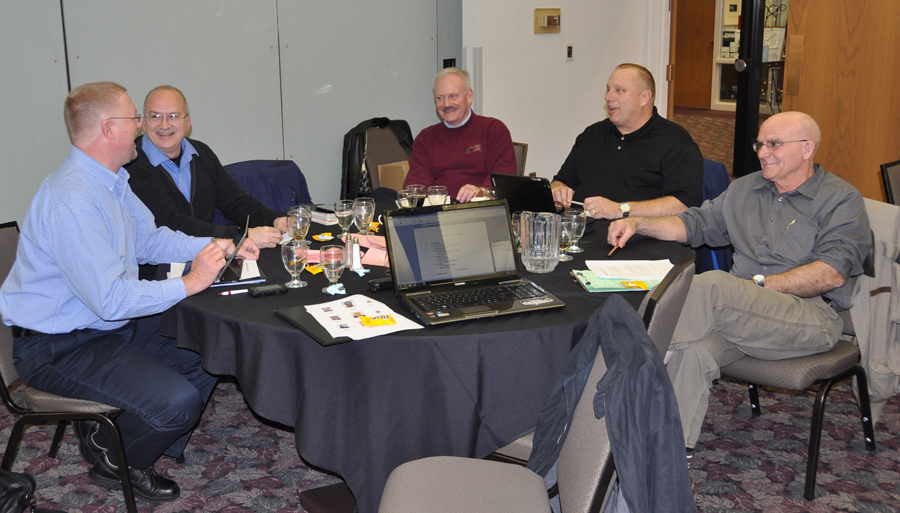 About 25 persons participated in the annual Cluster Leader Training on January 14, 2013. They met at the Habecker Dining Commons at Huntington University.

Denny Miller, the Cluster Coordinator, was in charge of the meeting, which lasted from noon to 4 pm. Gary Gates, Director of Licensing, spoke to the group about the new Provisional ministerial license and other issues regarding ministerial credentialing. Bishop Phil Whipple then walked through the 20-some proposals for changing the Discipline. These proposals will be acted upon in June 2013 at the US National Conference. (He will also present the proposals at a series of regional meetings in February, March, and April 2013).

Bishop Whipple also talked about the upcoming addition of Todd Fetters, pastor of Devonshire UB church (Harrisburg, Pa.), to the national office staff. Fetters, among other duties, will assume leadership of the clusters, a role which Denny Miller has filled for the past three years.

Bishop Whipple explained, “I’d been thinking for some time about ways to be more effective with the tasks God has placed before us. In November, I met with Gary Gates, Denny Miller, and Jeff Bleijerveld for a little over a day. One of the concepts that came out was the advantage of bringing in somebody fulltime, rather than part-time.

“I looked into the budget to see if it would be possible to hire a fulltime person. I decided it would work. With a part-time person, you need to find somebody who matches the specific need, has the time to give in addition to their regular work, and is close enough to drive in to the office. But if you’re looking at a fulltime position, you have a much larger pool of prospects.”

He interviewed Todd Fetters in late December 2012, and in early January offered him the position, which he accepted. It was announced January 11 on UBCentral.

The Bishop continued, “Denny Miller has been very gracious, saying that if we brought in somebody fulltime, he would be willing to step aside in leading the clusters. I appreciate that attitude. As I thought about Todd’s position, it seemed like it would be a good thing to place him in charge of the clusters.”

Bishop Whipple expressed appreciation to Denny Miller for his leadership of the clusters during the past three years, and for the ways he has advanced this important area. He then presented a gift to Denny on behalf of the denomination. 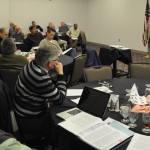 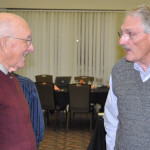 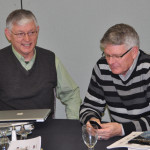 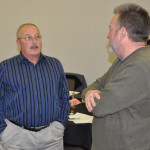 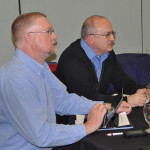 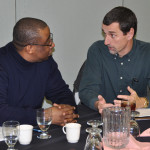 People can register for camps here.

The congregation on Grand Opening Sunday for the Vietnamese church. 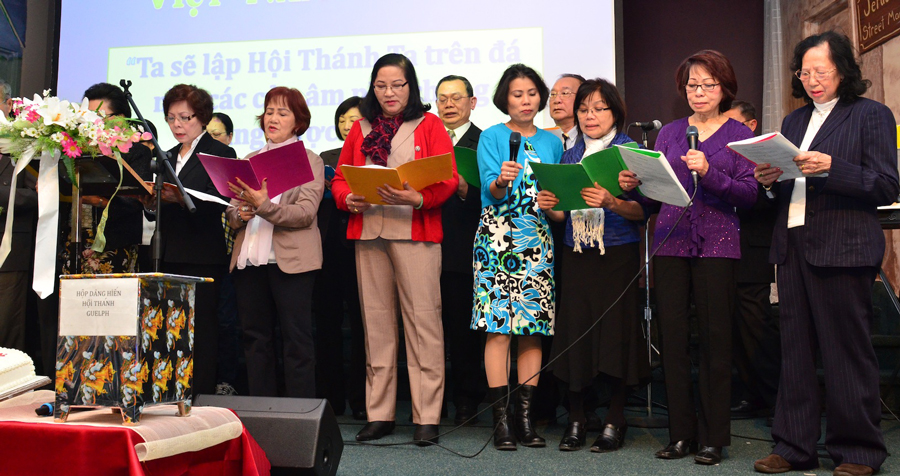 Dedication prayer for the new church. 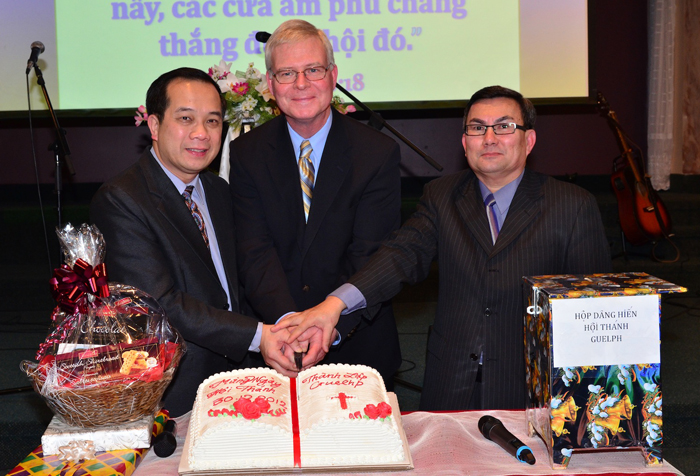 Cutting the cake for the new church. In the center is Rev. Mike Dell, Pastor of Spiritual Care at Parkwood Gardens and the United Brethren Church in Canada’s Leadership Development Team Leader. 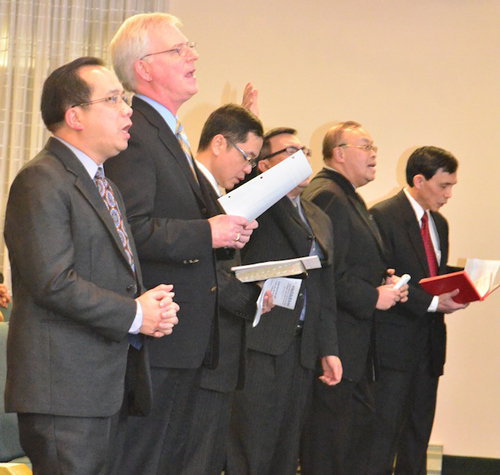 Leaders of the Vietnamese congregation. 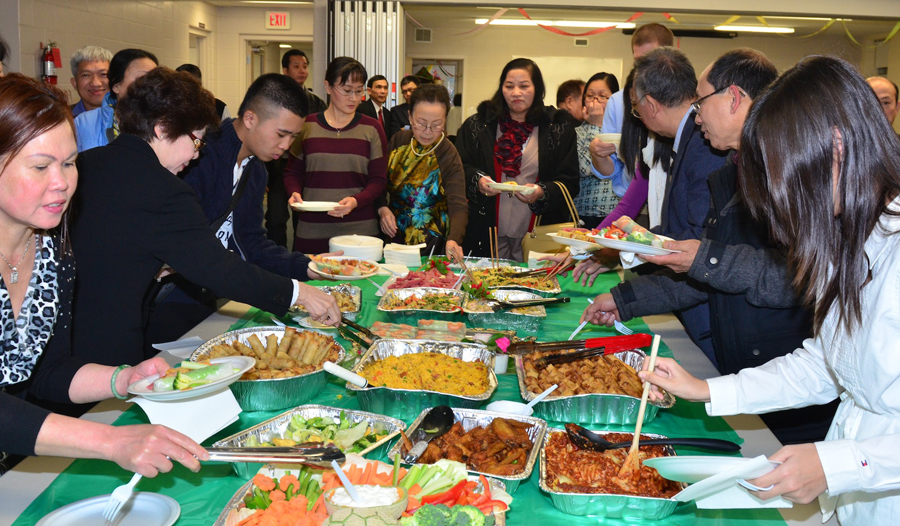 Parkwood Gardens took six months in 2012 to pray, research, and plan for God’s future for the next five years. In our research, we discovered that the Parkwood Gardens neighbourhood of Guelph was quite unique. Of the 120,000 people who live in Guelph, 8900 live in our neighborhood, and the top language spoken after English and French is Vietnamese.

The vision team prayed to know how to connect with this large demographic right in our community. Within a week, we were connecting with a group of 25 Vietnamese neighbors who were looking to plant a church, not even realizing that they were the largest minority group in the neighbourhood!

The church plant will be a partnership between the United Brethren Church in Canada and the Christian and Missionary Alliance denominations. The C&MA has a number of Vietnamese churches near Toronto, and will work towards finding a pastor for this new church. Parkwood Gardens UB will host the church and provide local oversight and fellowship.

Over 200 Vietnamese people attended the Grand Opening service, including the 25 in the core group, about 20 Vietnamese neighbours, and many friends from other Vietnamese churches.

Please pray that God will raise up the right pastor for this church, and that this partnership will lead to many Vietnamese people coming to faith in Christ Jesus. 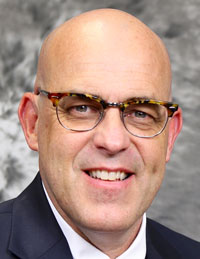 I am pleased to announce the addition of a new staffperson at the national office. On February 4, 2013, Todd Fetters (right) will join the staff as Director of National Ministries.

Todd has pastored United Brethren churches since 1989–six years at Lake View UB church in Camden, Mich., and the past 18 years as senior pastor of Devonshire Church in Harrisburg, Pa. He has served in various leadership positions, including cluster leader and, since 2005, member of the denominational Executive Leadership Team.

Todd grew up in a minister’s home as the son of Dr. Paul and Barbara Fetters. Todd’s two brothers, Brooks and Luke, are also ordained UB ministers. He graduated from Huntington University in 1989 with a degree in Bible & Religion, and in 1991 with the Master of Christian Ministry. More recently, in 2005, he received a Master of Arts in Religion from Evangelical Seminary in Myerstown, Pa.

Todd and his wife, Lisa, were married in 1988. They have two sons, Jordan and Quinn, both of whom attend Huntington University.

Todd’s responsibilities will include various administrative duties, such as assisting with the process in stationing ministers, overseeing the national ministries staff, and developing strategic initiatives to move the UB church forward in such areas as leadership development and healthy church ministries. Todd will also oversee the cluster system, assuming responsibilities which Denny Miller has handled on a part-time basis for the past two years.

Todd announced this decision to the Devonshire congregation on January 6. He told them that the position blends his love for the local church, and his love for the denomination which is so much a part of his identity.

I am excited about bringing Todd aboard and working closely with him in the years ahead.