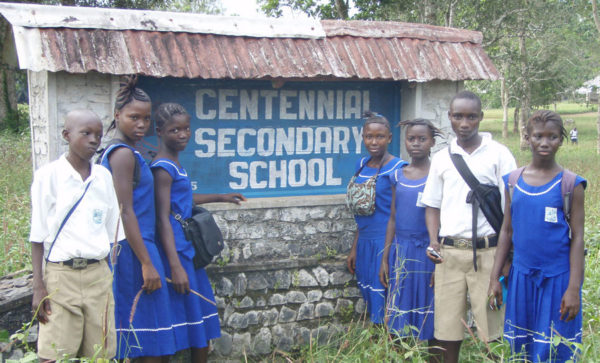 On January 7, 1955, Centennial High School was dedicated in Mattru Jong, Sierra Leone. The name recognized 100 years of United Brethren ministry in Sierra Leone. It was a big day. The 800 guests included various government dignitaries, and the National Secretary of Education gave the keynote address.

Centennial was not only the first UB high school in Sierra Leone, but the first co-educational high school in the country. Spearheading the school was missionary DeWitt Baker, who had arrived in Sierra Leone in 1949 (and in 1965 became president of Huntington University). He ordered materials, hired and supervised workers, and oversaw all other aspects of construction.

They needed hundreds of bags of cement, which they mixed with sand on the beach to make thousands of blocks. Construction stopped in June with the advent of rainy season. When work resumed in September, 100 men arrived seeking work. DeWitt hired 50 of them. He wrote, “I hauled stone and sand, and kept my eye on all that was happening.”

Ultimately, there were 15 buildings, including an administration/library building, boys’ and girls’ dormitories, four classroom buildings, bath houses, a dining hall, a chapel, and five buildings for staff. Water was pumped 800 feet from a stream into a large tank which supplied the various buildings.

After ten years, the school had grown to nearly 300 students. After 30 years, there were 600 students and a staff of 31. Scores of children had found Christ, and Centennial alumni could be found in cities throughout the country working in colleges, police stations, schools, government posts and sundry other jobs.