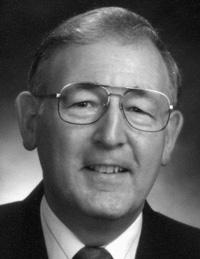 Rev. Kyle McQuillen passed away on March 16, 2020. He and his wife, Mar Louise, had been living in Fredericksburg, Va. Funeral plans are on hold as a result of the COVID-19 crisis. However, cards can be sent to Mar Louise at this address:

Kyle McQuillen served eight years as the denomination’s Director of Missions, 1993-2001. That was a time of unprecedented international expansion for the United Brethren church, as we added work in Thailand, Costa Rica, Mexico, Guatemala, El Salvador, and Haiti. The tumultuous civil war in Sierra Leone occurred during those years, we changed how we support UB missionaries, Hong Kong and Macau came under the control of China, and our various international fields became self-governing national conferences.

McQuillen grew up in the United Methodist Church, in which he served as a pastor and a missionary in Nigeria. While pastoring a UMC church in Shippensburg, Pa., he became friends with the local United Brethren pastor, Rev. C. Ray Miller, who was also chairperson of the UB Board of Missions. That contact led to McQuillen agreeing to serve as a UB missionary in Sierra Leone 1983-1985 to oversee the nationalization of our work there. He subsequently became an associate director of missions at the United Brethren national office, and in 1989 began four years as senior pastor of College Park UB church in Huntington, Ind.