09 Sep Our Four-Nation Team in Thailand 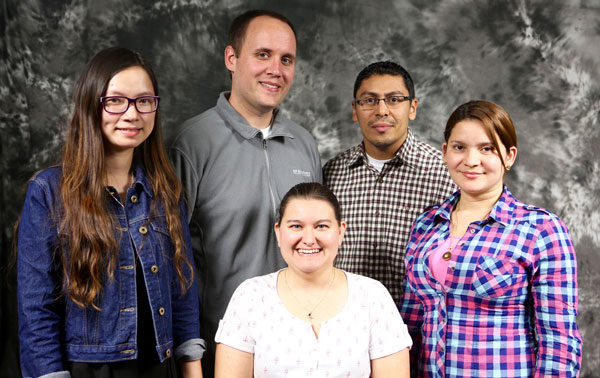 The Global Ministries church planting initiative in Thailand is the largest United Brethren missions venture since Macau in 1987. It is a multinational effort, with people coming from four different countries. A family of five recently arrived in Thailand, and five other missionaries will soon join them. Here is an update on what is happening now, and what lies ahead. Several missionaries are still raising support, so at the end you’ll find opportunities to come alongside them.

Our Team Members
Brian and Rachel Glunt, along with their three children, arrived in Thailand on August 9. They are from Emmanuel UB church in Fort Wayne, Ind. The Glunts are getting settled in, taking care of such things as locating a home, finding a vehicle for a family of five, getting their kids into school, opening a bank account, etc. For now, they are living in a condo hotel, kind of like an extended stay hotel.

Erika and Milton Pacheco, from Honduras, will likely join the team in early 2017. They continue to raise their support. Since it will be difficult for Honduras Conference to fully support them, the Pachecos will come to the United States this fall to develop partnerships with United Brethren here.

That brings us to the latest addition to the team, Paula. Since she comes from a sensitive country, we can’t publish her picture or give details about her via any internet media. However, we are very excited by what she brings to the team.

Our Newest Team Member
Paula attended a top-tier university in her country, and became a Christian when a friend took her to a house church. Since then, she has been fervent in sharing her faith. During one 40-day stretch, she set a goal of sharing the Gospel with one new person each day. She also shared with every member of the company where she worked.

We became aware of her in a roundabout away. She was helping another mission organization by serving as translator for short-term mission trips (her English is excellent). I was told about her by a member of one of those teams. When she came to the States earlier this year to visit friends, I met with her.

Over the course of several months, we got better acquainted. Finally, this summer, the Global Ministries team had the chance to formally interview Paula and accepted her to join the Thailand team.

We hope she can join the team in Thailand during the first quarter of 2017. It all depends on how quickly she can raise support. Coming from a small house church and a nonChristian family background, she has a limited base of support. We are bringing her to the United States in November 2016 so she can spend a couple months developing partnerships with United Brethren individuals and churches.

Getting Started
During this first year, the entire team will focus on learning the Thai language and culture. Down the road, Thai will be the common language for the team.

We took about ten research trips into the area to see how the UB work could fit into what God was already doing. We developed relationships with local pastors and missionaries, who are willing to help the Glunts and the rest of our team get oriented. A key contact is a missionary from Singapore—yet another country we can add to our international mix.

In 2015, we purchased a building in Chiang Rai which will become our ministry center. We hope to thoroughly renovate the building during the next year; Hong Kong and Global Ministries (the US and Canada) will split the cost.

Among other things, we will teach English and Mandarin Chinese. Learning Chinese is very popular in Thailand. Many Chinese tourists come to Thailand, and China is increasing its trade with Southeast Asia. A highway between China and Bangkok cuts through Chiang Rai, and there is talk of a high-speed train from China to Thailand. If you know English and/or Chinese, you have excellent job prospects. This is especially true in Northern Thailand. In Chiang Rai, all major street signs have Chinese, English, and Thai on them.

The Glunts signed up for a program to learn the Thai language and culture. Julie Hui and Lai Au Yeung will attend at the same time. The Pachecos and Paula will start the program in 2017.

The two older Glunt children are attending an international Christian school. The youngest child will attend a local kindergarten that is taught partly in Thai and partly in English.

FYI: Bryan and Emily Gerlach, whom we sent to Thailand in September 2013 as the first members of the Thailand team, completed their first term and chose to work with a local church through another ministry in a different Thai city. They are now listed as United Brethren endorsed missionaries.

From Everywhere to Everywhere
The global church today is literally Christians from everywhere going everywhere. I love that our Thailand team encapsulates what God is doing in our world.

This summer, I attended a Lausanne Conference in Indonesia. I met an ethnic Korean who grew up in China and holds a Chinese passport, and now works in Turkey and reaches out to Muslims. There are many such stories. Brazil is sending out massive numbers of missionaries. So is Africa. A majority of today’s missionaries are being sent out from non-Western countries.

Our Thailand team is a reflection of the global church today—the first time that all of God’s people, from everywhere, can work together. Missionaries from the United States, Hong Kong, Honduras, and another country working together to reach ethnic Thais in Thailand.

Partnership Opportunities
The Pachecos will be in the United States September 15 to November 23, living in the UB mission house in Huntington and visiting UB churches. They are already booked up on weekends, but are available for any weekday events or groups at your church. Milton and Erika have a unique Latin American perspective about what God is doing in Honduras. They are also very musical; in fact, they’ll be leading worship during some of their Sunday visits.

Paula will be in the States from November to January, and is also available to meet with local churches. She can tell you exciting things about what God is doing in her country.

The Pachecos and Paula need additional financial and prayer supporters, and are available to meet with local churches. If you are interested in hosting any of them, please contact the Global Ministries office. You can contact Jana Gass, our administrative assistant, at jana@ub.org. Or call toll-free: 888-622-3019.